If Then She Can 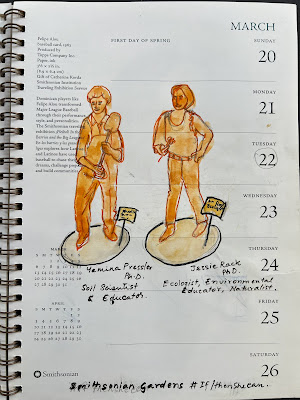 #ifthenshecan sketch pit markers and ink by Meera Rao
When we went for our walk in the National Mall in Washington DC, I came across a few orange life like statues scattered around Enid A Haupt Garden by the Smithsonian Castle. Turns out, #ifthenshecan-the exhibit “is the largest collection of statues of women ever assembled together, to be installed on and around the National Mall. The 120 life-size 3-D printed statues are of a diverse coalition of contemporary women STEM innovators and role models leading a variety of fields, from protecting wildlife, discovering galaxies, building YouTube platforms, to trying to cure cancer.”
I had picked the two statues by the castle entrance to sketch because they were the first ones I came across! Yasmina Pressller PhD is a Soil Scientist and an Educator, and Jessie Rack PhD is an Ecologist, Environmental Educator and. Naturalist. These statues were  among the many in the Garden. Later when I got home I read that during the opening weekend earlier in the month, visitors were able to explore all the 120 statues placed in the castle, garden and AIB.  Starting March 7, select statues were then spread out to the Smithsonian National Museum of Natural History and National Air and Space Museum along the National Mall through the end of the month.  #IfF/THEN is an initiative of the Luda Hill Philanthropies designed to activate a culture shift among young girls to open their eyes to STEM careers. 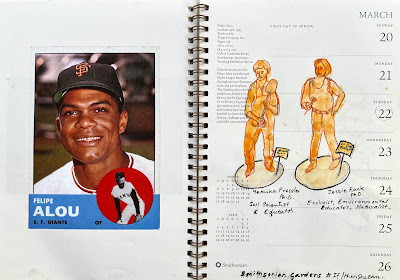 Smithsonian Engagement Calendar 2022 week13 March 20-26
I think it’s pretty interesting that the photo in the Smithsonian Engagement Calendar 2022 week 13 is from an Smithsonian traveling exhibit that explores how another minority in USA, Latinas and Latinos have used baseballs to chase their dreams, challenge prejudices and build communities.  The photo is of Filipe Alou baseball card 1963, produced by Topps Company Inc. 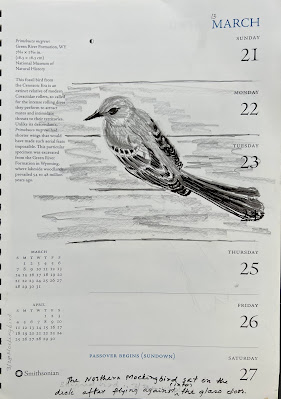 Northern Mockingbird ink and graphite by Meera Rao
We have a sunroom and glass doors, windows on the back of our house and have taken care to not have birds crash into it. Unfortunately once every few years a bird does fly into it the glass and gets stunned. This mockingbird stayed still for an hour or so on the deck and then slowly recovered and flew off. I watched the bird to make sure it was ok and sketched - as it is not often I get to see a live bird sit still for any length of time. 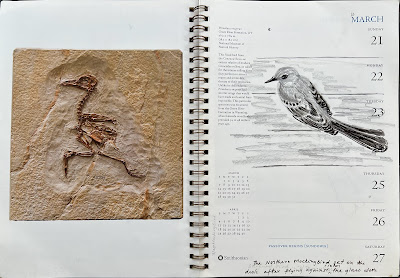 Smithsonian Engagement Calendar 2021 week 13 March 21-27
The 54-48 million years old bird fossil pictured is on the left in the Calendar is of Primobucco mcgrewi from Green River Formations WY - now at the National Museum of Natural History. According to the information in the book  “The fossil from Cenozoic era is an extinct relative of modern Coraciidaerollers, so called for the intense rolling dives they perform to attract mates and intimidate threats to their territories. Unlike its descendants Primobucco mcgrewi had shorter wings that would have made such aerial feats impossible”
Posted by Meera Rao at Wednesday, August 17, 2022