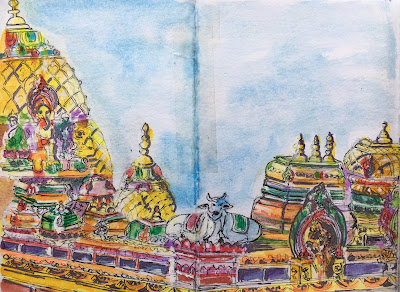 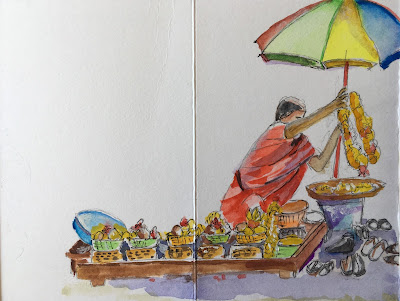 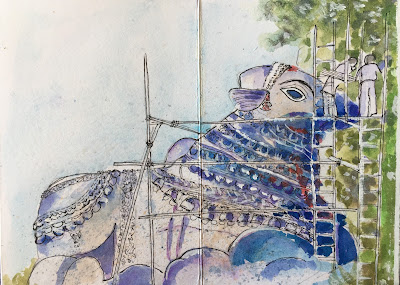 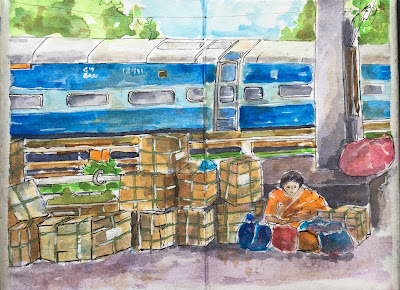 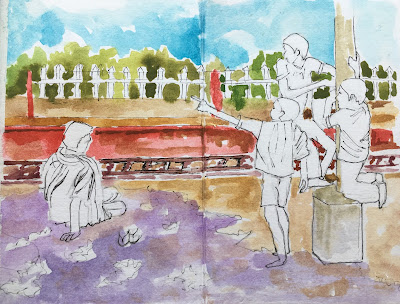 The Japanese Style USKbook Sennelier Multimedia 340 (6x4" opening to 6x39") is where I sketched and painted vignettes of my trip to India earlier in February.  I was trying to have a theme but it slipped my mind while sketching the last four panels. It just happened that I used two panels per subject in this book. I sketched them during my trip but applied the watercolors later.

I started with the view from balcony of my brother's house.  The temple is right across the road. The colorful Temple Domes though complicated were fun to sketch but hard to paint.  I had used two panels to sketch. Unfortunately while painting, the wash settled on the crease between the panel. The paper tore along the fold so I had to resort to clear tape to hold it together.  I also reinforced the back og the crease. It was my first time using this particular brand of sketchbook and the detailed sketch was not the right one to get used to the paper.  But I think I captured the colorful busy-ness of the domes!

Devotees often buy coconut, flowers and fruits as offering to the Deity when they visit the temples. The vendors line up the entrance to the temple and sell small baskets filled with bananas, fruits and flowers. Many vendors also have a side-business of keeping an eye on devotees' footwares for a fee as visitors are not allowed to wear their shoes and 'chappals'  inside the temple. Just leaving them outside without supervision is not a good idea!

This massive Nandi (bull) carved out of a single stone, is 15' in height and 24' wide. It sits on the way to the Chamundi Temple which is on top of the Chamundi Hill in Mysuru, Karnataka. We were visiting the day before a major festival and there was scaffolding around to assist in decorating the statue with flowers, sandlewood paste and red Kumkum.

The last four panels depict railway platform scenes. I came across the lady sitting crosslegged surrounded by boxes and bags. Perhaps she was moving to another city!  Passing time while waiting for the train, the man was sitting in the shadow of a huge tree that was left undisturbed in the middle of the platform! The three kids were climbing a pole for a better look at whatever grabbed their interest.  I decided to leave the people unpainted to show that the scene remained the same while the players the changed  :)

Paintings and Sketches Show and Tell 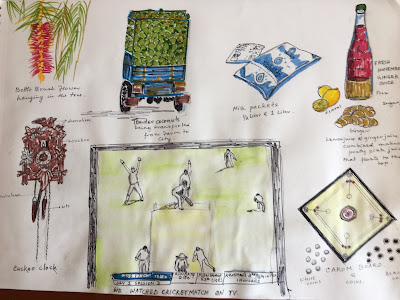 Above is the third of my sketch pages from my trip to India earlier in Feb.  These were the sketches I was doing for my grandchildren :) I have couple of more pages of sketches and a Japanese style sketchbook that I am yet to scan - I just forgot once returned and plunged into my daily life here ! 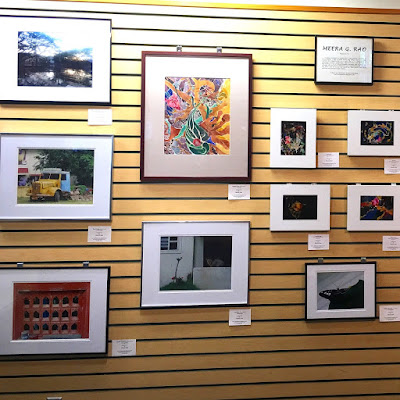 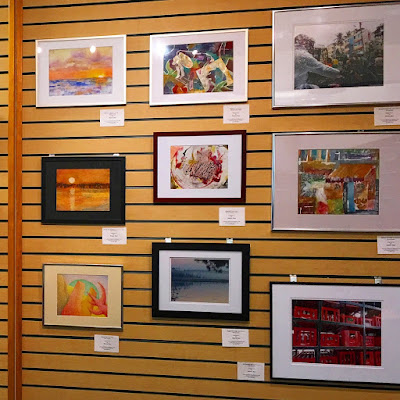 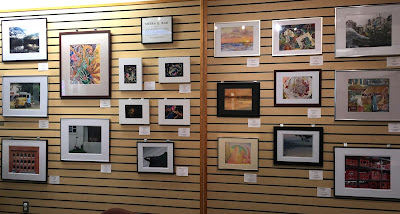 This year's collection were a surprise to me too as I put together the show for our local library.  I discovered the past year  I experimented with mixed media, collage and photography :) 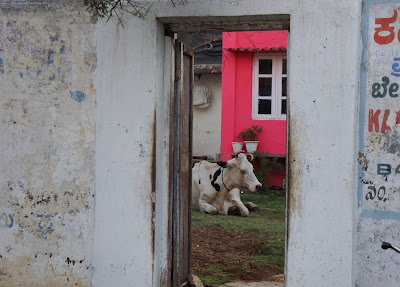 Resting, my photograph taken in India ,  just  returned home  after being a part of the show "Artist as Photographer" at Charles Taylor Art  Center in Hampton, Va. 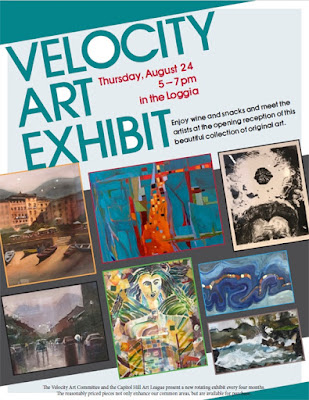 Finally, today is the opening of a group show at Velocity in Washington D.C. where "Dreamer" (shown on the flyer) and "Guest" will share the wall space :)