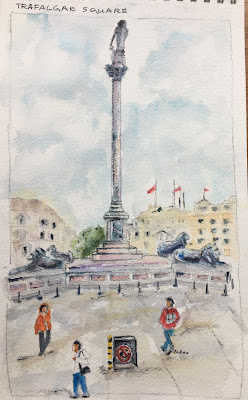 The day we were at the Trafalgar Square was cloudy and cold.  Since we were there early in the morning there weren't too many people around. The imposing and 145' tall Nelson Column  was built in 1843 to honor Lord (Admiral) Horatio Nelson who died at the battle of Trafalgar in 1805. The British won that battle against the French. The Trafalgar Square itself dates back to 1830. I read that the four lions guarding were made by melting the defeated French  Navy bronze cannons.  I found an interesting connection there to the United States : "In Trafalgar Square there are also various statues of well-known people such as George Washington, given to the English by the State of Virginia. The statue is placed on cement brought specially from the States, as Washington had sworn he would never set foot on British soil again"

I am sorry we missed -by a day or so- seeing the 'Please Feed The Lions' an interactive sculpture by artist and designer Es Devlin, who is known for her innovative projection-mapped sculptures that fuse light, music and technology. There was a companion red lion on the square and visitors were encouraged to 'feed' words to the lion which was then mixed with others' words and 'roared' out to the public, and displayed in light on the Nelson column at night.  Check out the Lonely planet link to it here.   And a video of it here.
Posted by Meera Rao at Wednesday, February 27, 2019 No comments: 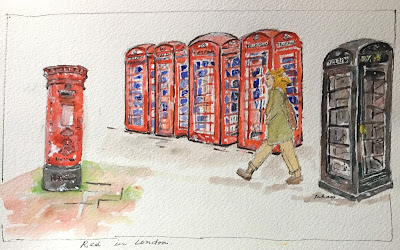 'Red' is everywhere in London lending color to gray days. The red buses of course brighten the roads as they travel. There is a red mailbox in every neighborhood. The rows of red telephone booths in a street corners are a common sight. The black FreeWifi/telephone booths are new additions highlighting the evolution of how we connect these days.  I read that there is great controversy about this latest connectivity 'box' - is it making London into a smart city or letting a few giant companies track your movements throughout the city with the ultimate goal of monetization?