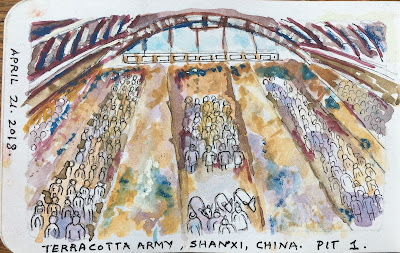 From Xi'an City wall, after cheering the marathon runners, we drove to the archeological excavations site and museum of the  famous Terra-cotta warriors discovered in 1974 by local farmers. The subterranean life size terracota army(210-209 BC) of Emperor Qin Shi Huang was awesome to see. The sight of more than 5000 of  the dug up and restored warriors, horses, carriages, artifacts in the excavation pits took my breath away! There were three huge pits and a few warrior statues were displayed away from the pit on higher floor where we visitors could see them up-close.  The excavations and discoveries are still in progress.

Co-incidentally, I had recently watched a documentary about the discovery this archaeological site, the history behind it and also had visited the US tour of a small part of the Army and artifacts at the Virginia Museum of Fine Arts at Richmond, Va. That helped me understand the scale and importance of this site. Again crowds here were just HUGE - had to squeeze and elbow our way to the viewing balcony to be able see anything at-all:) 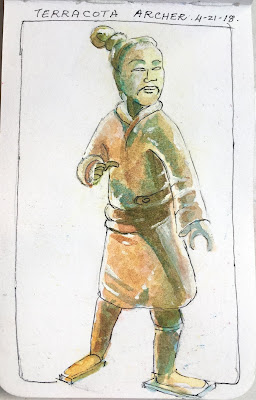 The details on these warriors, horses etc. were very impressive - no two are alike! This archer  was probably holding a bow and arrow ready to defend at moments notice by the looks of his pose. 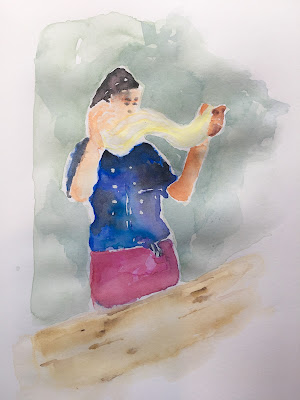 For lunch we were treated to handmade noodles that were prepared right on the premises in the museums restaurant. It was fascinating to see how by just stretching and twisting repeatedly within minutes the dough is turned into to long noodle threads!!! They are then cooked in boiling water for a couple of minutes, drained and served.

This last painting is not in my sketchbook but a part of the #30x30Directwatercolor, #nosketching challenge  :) 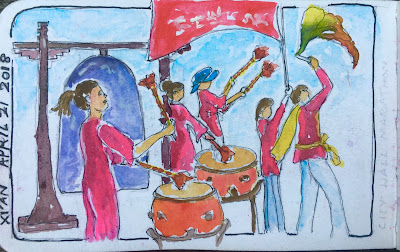 Cheering the Runners at Xi'an   ink and watercolor by Meera Rao 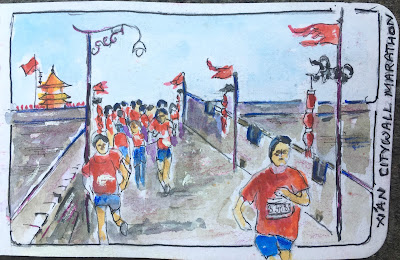 After a sumptuous breakfast, we set out early to explore Xian. Xi'an, an ancient capital of China has the oldest, largest and most well preserved fortifications.  Our guide was excited and flipped our itinerary a bit.  She drove us to city wall and gate (built in the 14th century) much earlier than planned because it was Xian City Wall Marathon day ! We too climbed up the city wall to watch and cheer as the runners went by. It was the very festive and Chinese version of the Rock and Roll marathon - with mostly retired elderly ( and mainly women) drumming and leading the cheers with ribbons, flags and colorful scarves as the runners breezed through.  We also had a great view of the city from the wall. 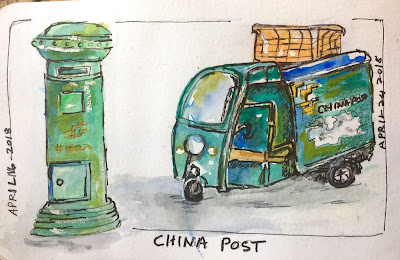 Among the things that caught my attention during our trip to China were the green Chinese post boxes, mail vans and post offices. The mail delivery and pick up vehicles especially in the cities were all small and  three wheeled.  This one had a big basket on top. 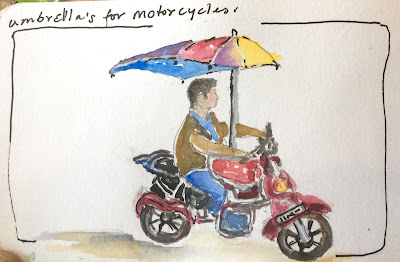 Umbrella for Motorcycle ink and watercolor by Meera Rao 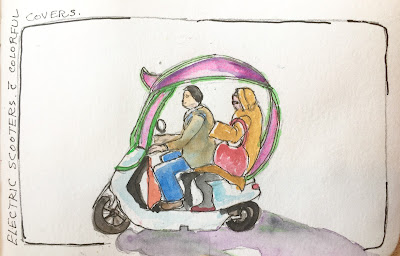 Electric scoters with covers ink and watercolor by Meera Rao

To tackle transportation and  environmental problems, China has millions of electric motorbikes and scooters - electric are the only ones allowed on the roads now. I saw a number of them being charged by the curbside with electric wires running from stores or houses.  They run very quiet and walkers have to be vigilant and  watch out for fast moving vehicles that sneak up suddenly in their path! Many of the bikes and scooters I saw had colorful umbrellas or covers to protect them from rain and sun :) 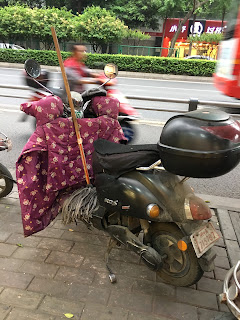 Another interesting feature was how they used coats/jackets or special covers for their hand and vehicle handles but not the rest of the body!
Posted by Meera Rao at Monday, June 18, 2018 2 comments:

Chengdu, capital of Sichuan Province was our next stop. Chengdu seemed like a laid back modern city with high rises and bustling ring roads. I fell in love with the old part of the city with its beautiful and grand traditional buildings, the ancient Wenshu Temple dedicated to Manjushree, and its distinctive streets.  The pavement in each street in the old city had its own special carved markings. The Temple and its sprawling gardens once again were an oasis of calm and serenity.  And of course, the restaurants by the temple served delicious vegetarian and vegan food! 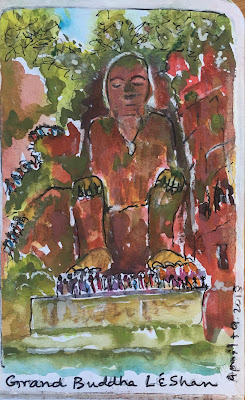 Le Shan's Grand Buddha was an easy day trip from Chengdu. The serene 1200 year old 71meters (233') tall Budha is carved from a cliff overlooking the confluence of three rivers: Min, Dadu, and Quinyi. It is also an Unesco World Heritage site. We took a boat tour so we could see the entire statue. The view of the cliff, the Buddha statue and the many centuries old buildings enhanced the leisurely boat ride. I even had time to sketch as the boat slowly made its way to and from viewing the statue. :) Later we enjoyed walking along the park-like riverfront of the picturesque town of LeShan. 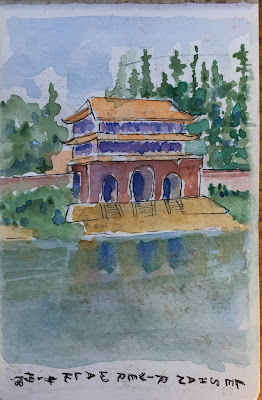 View from Boat,  LeShan watercolor and Ink by Meera Rao

The next morning was devoted to observing the Pandas at the Giant Panda Breeding Research Center.  The vast and beautiful park like research center is a popular tourist attraction and once again there were HUGE crowds! We saw many adult pandas resting or eating and about half a dozen juveniles climbing and playing.  They were all spread out in the park and we got our day's exercise by walking  a couple of miles or more :) 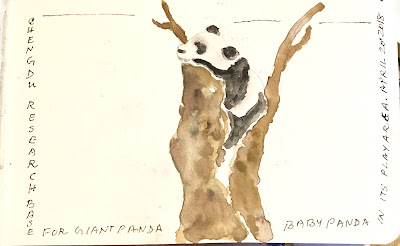 In the old part of the city, we found many vendors selling fruits, noodles, and knickknacks in small stalls.  Some had a few baskets of fruits and vegetables set on the steps. This particular stall selling mulberries, mangoes, dragonfruits and jackfruits was flanked by elegant stone carvings of an elephant on a circular wheel like base.  A couple of books and a baby's sippy cup were resting on the elephant. I noticed that around dusk, in the old part of the city, many families pulled chairs around a folding table right by the street side next to their stalls and enjoyed their dinner and conversations. 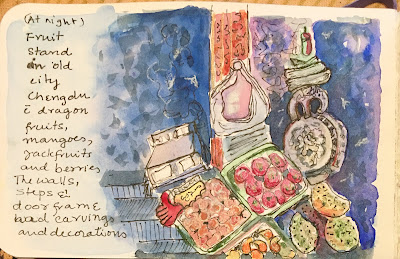 Fruits for Sale on the Steps of an Old Building in Chengdu watercolor and Ink by Meera Rao
Posted by Meera Rao at Monday, June 11, 2018 2 comments: 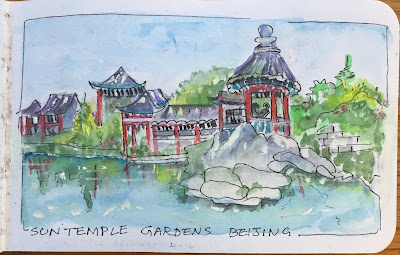 We went exploring one evening from our hotel. The Sun Temple and Ri Tan Park so clearly marked on the map within walking distance somehow kept eluding us.  And then suddenly just as we were about to give up, I saw a sign with so many things crossed off (see below) and had to take a photo. Right next to it was the sign we were looking for all along :) near an unassuming gate.

Ritan - The Temple of the Sun was built in the 9th year of Emperor Jiajing in 1530 during the Ming dynasty. Along with temples dedicated to the Earth, the Moon, and  the Temple of Heaven, its one of five historical temples of Beijing. The Temple of the Sun was used by the imperial court for rites of worship of Sun, fasting, prayers, dancing as part of a year-long cycle of ceremonies. The color red was associated with the Sun, including red utensils for food and wine offerings, and red clothes for the emperor to wear during the ceremonies. The temple is now part of a public park. 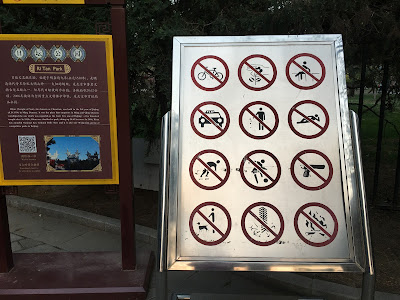 We strolled the beautiful grounds lined with trees full of red blossoms.  It was an oasis of peace in the middle of a buzzing city! There were people doing tai chi, exercise walking, chatting away and some meditating in quiet corners.  The temple complex is grand with ornate pagodas, ponds, rock sculptures, and serene gardens. We watched the sunset from top of a little hill with a beautiful pagoda in the center of a small garden. By the time we walked around and found the temple, it was dark and the doors were closed for the day. But we had a very enjoyable  and peaceful evening. 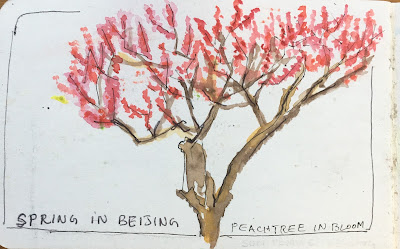 Spring in Beijing  watercolor and ink sketch by Meera Rao