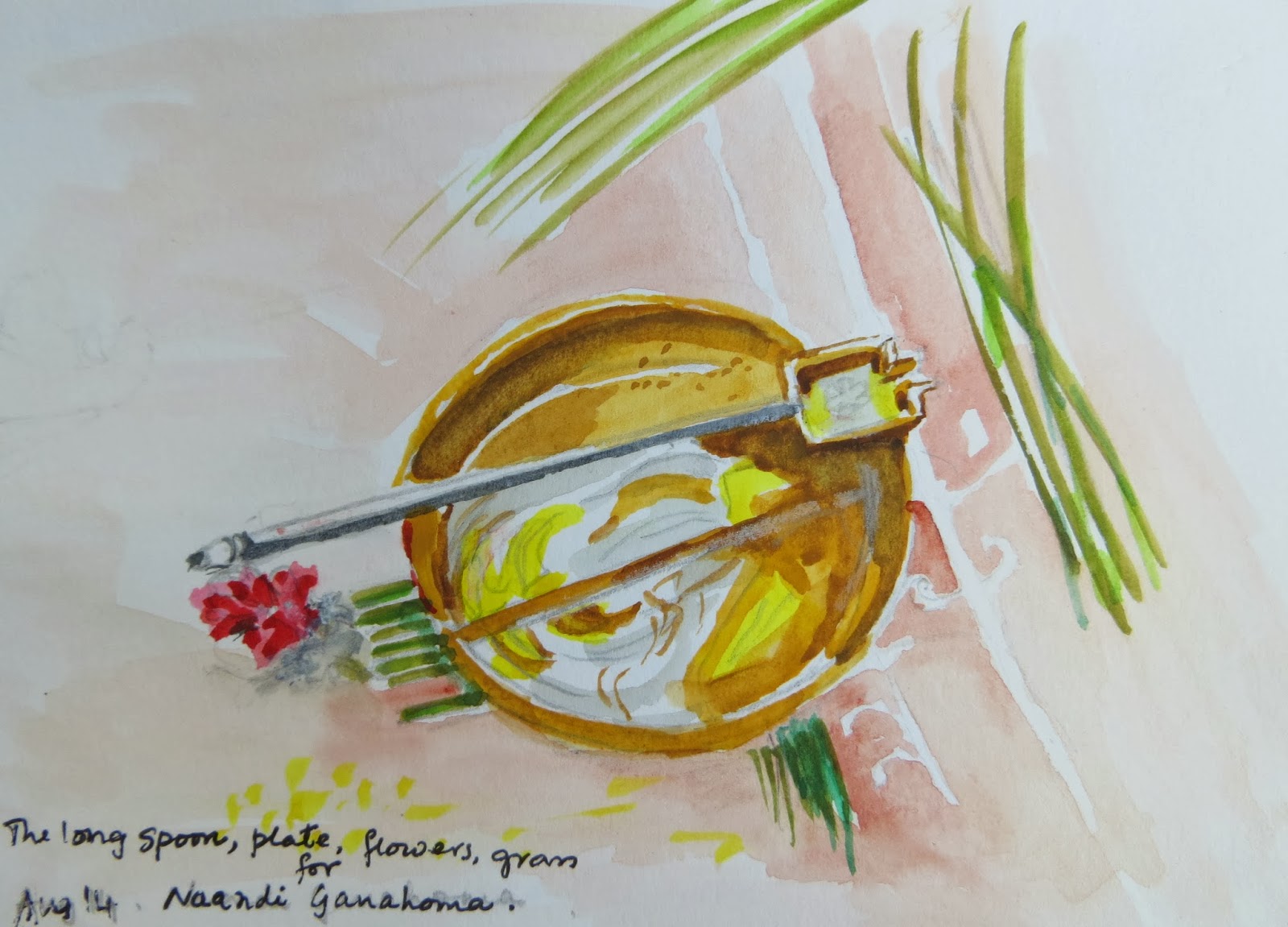 Any event usually starts with a prayer to Lord Ganesha -the god who is the remover of all obstacles. This plate with clarified butter - ghee, and the special spoon was used in a ceremony, Homa, asking for blessings- at the start of the festivities, about a week before my niece's wedding. All the rituals are filled of symbolism and are beautiful --even though in this day and age they seem long! But it forces one to stop and give thanks as well as contemplate our role in the Universe.

I loved the patterns, reflections in the plate, shapes and the colors and had to sketch it. I wish I could have captured the sound of the melodious chanting of the prayers too. August 15 is India's Independence day and Jan 26 is Republic day when you see Indian flags flying everywhere.  Here, an autoriksha driver is attaching the  flag to his vehicle to show his patriotism.  The already colorful vehicles decorated with the tricolor flags are sight to behold. 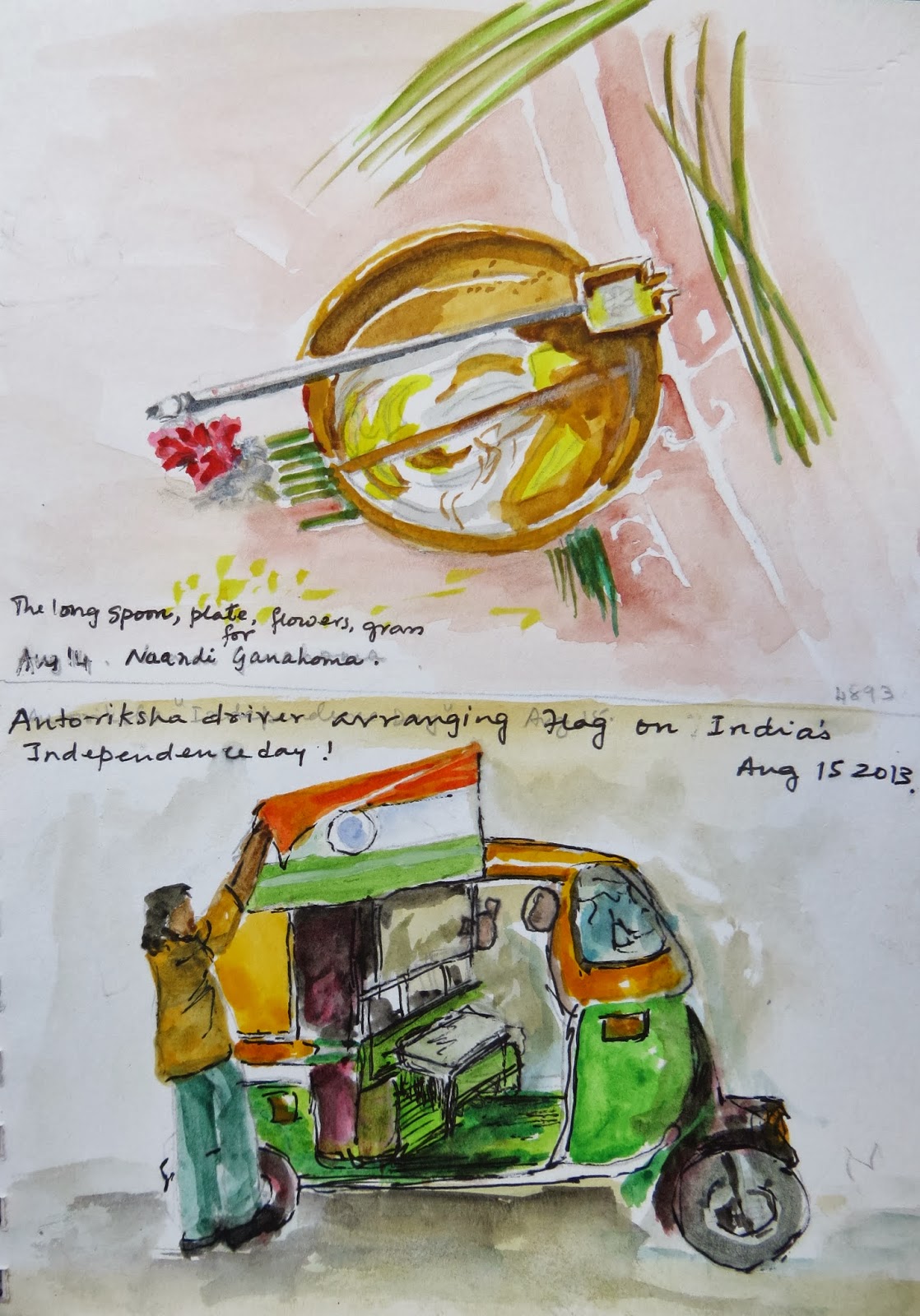 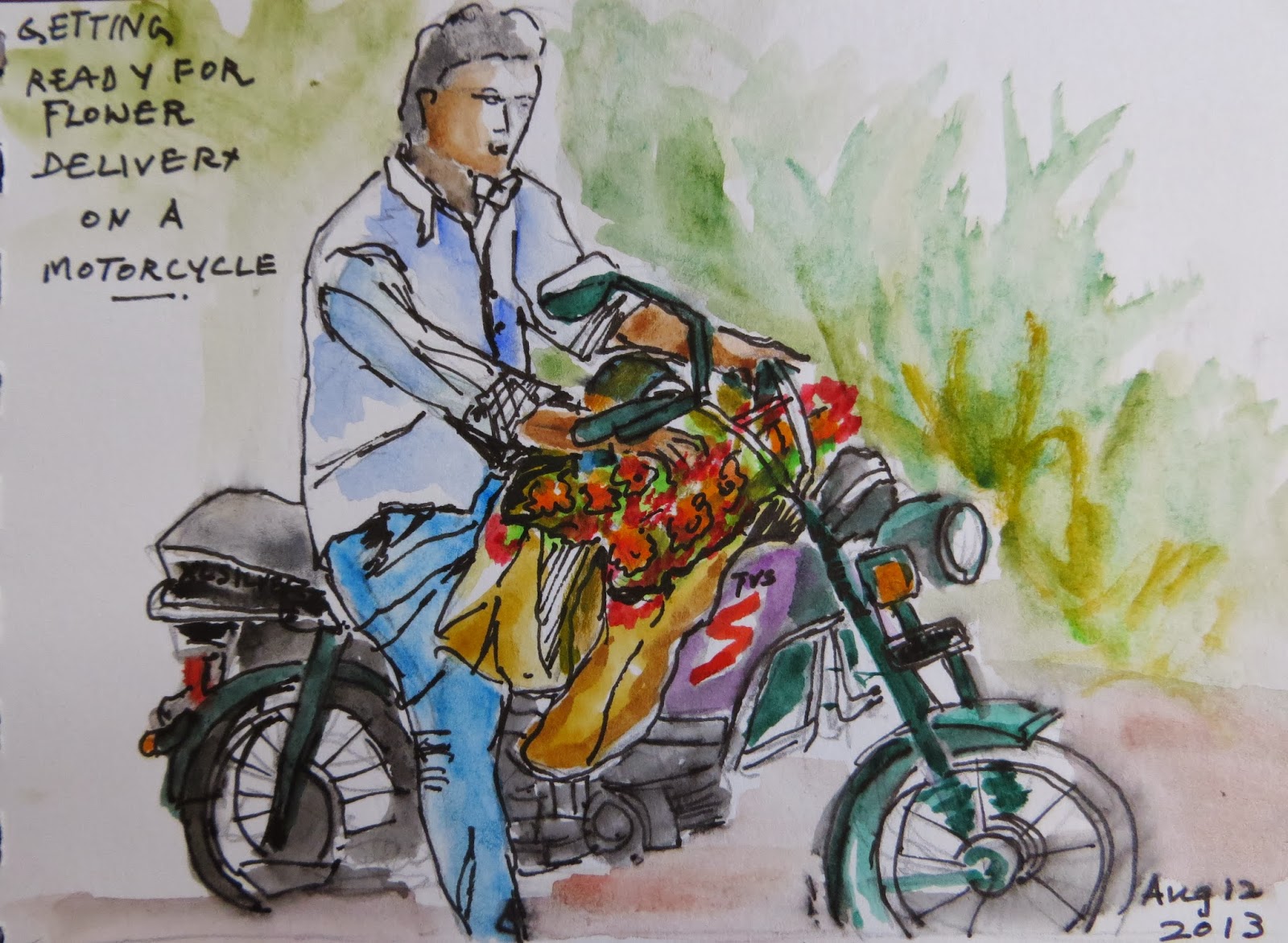 Speedy delivery by motorcycle of various things is nothing out of the ordinary  in India. I came upon this fellow with bags of flowers hanging off the motorcycle handle bars. The motorcycles weave through the heavy traffic and guarantee dropping off  of parcels faster than in a car or van! I saw his bike with flowers parked by the road and started taking a few pics when he returned from his delivery and posed for me for a quick second. He did have an helmet which he wore soon after and then drove off to the next stop. 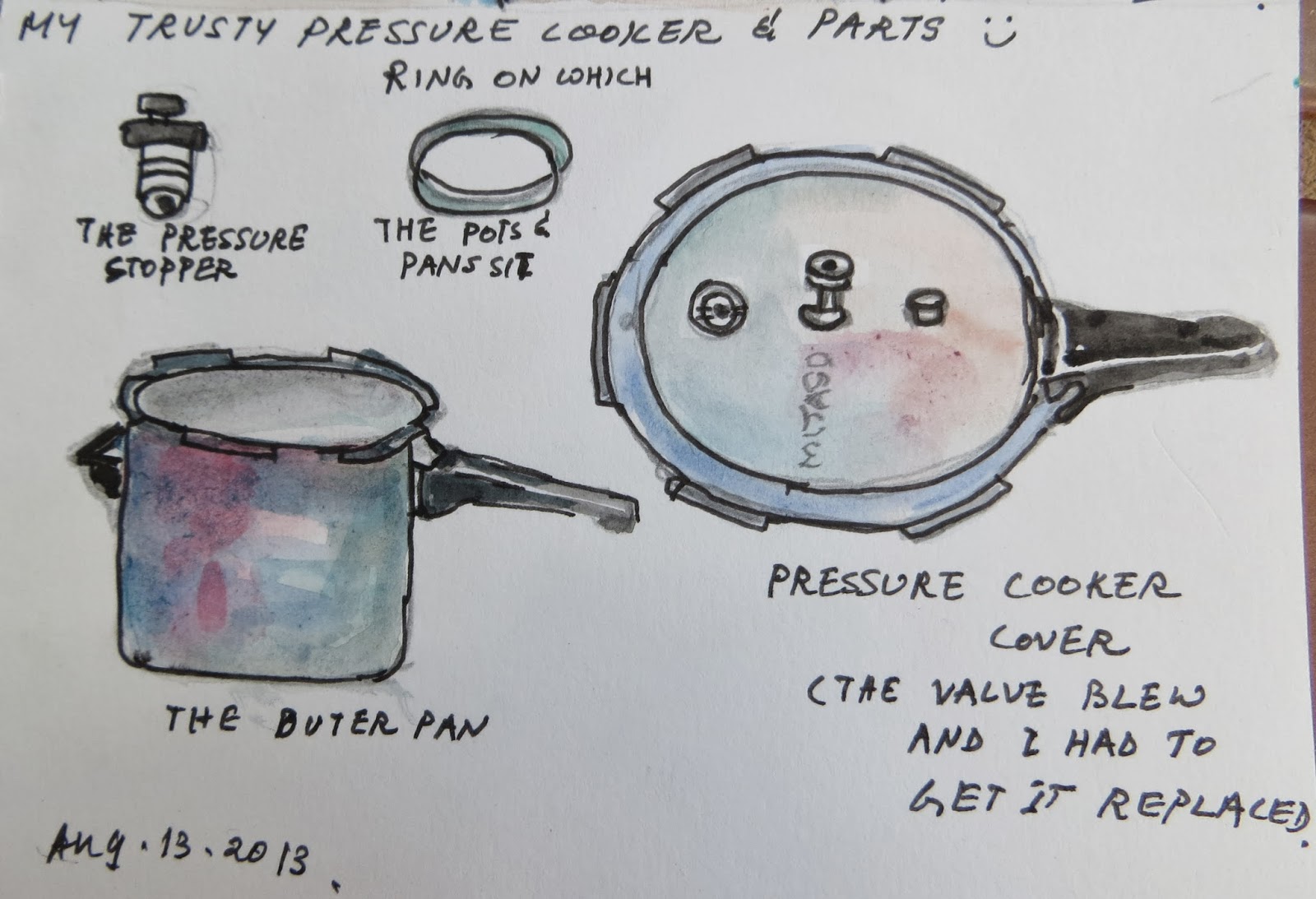 Some days I have time only for a simple sketch -- but then, here it is the trusty pressure cooker - the most important equipment in a household in India! I used one everyday  for cooking - it is an art and a science to master!  At least three pots are stacked inside each cooker with dal/lentil/bean in one, rice in the second and a vegetable or two in the third :) This  saves time, cooking gas (which is very expensive) and is super efficient.  These come in many brands, sizes  and varieties. I had to constantly consult my Mom and sisters-in-law over the phone on the finer points of using a pressure cooker - so I would not end up with either mush or under-cooked food! I really appreciated the cooker when I could not use it for a day - somehow I had miscalculated the amount of water/time needed and the valve blew due to lack of liquid.  But no worries, just down the street, in a tiny tiny shop, it was fixed in no time at all :)

In my home in US I now have a electric pressure cooker with a timer which I absolutely love, along with a much used stove top cooker that I have had for over three decades. 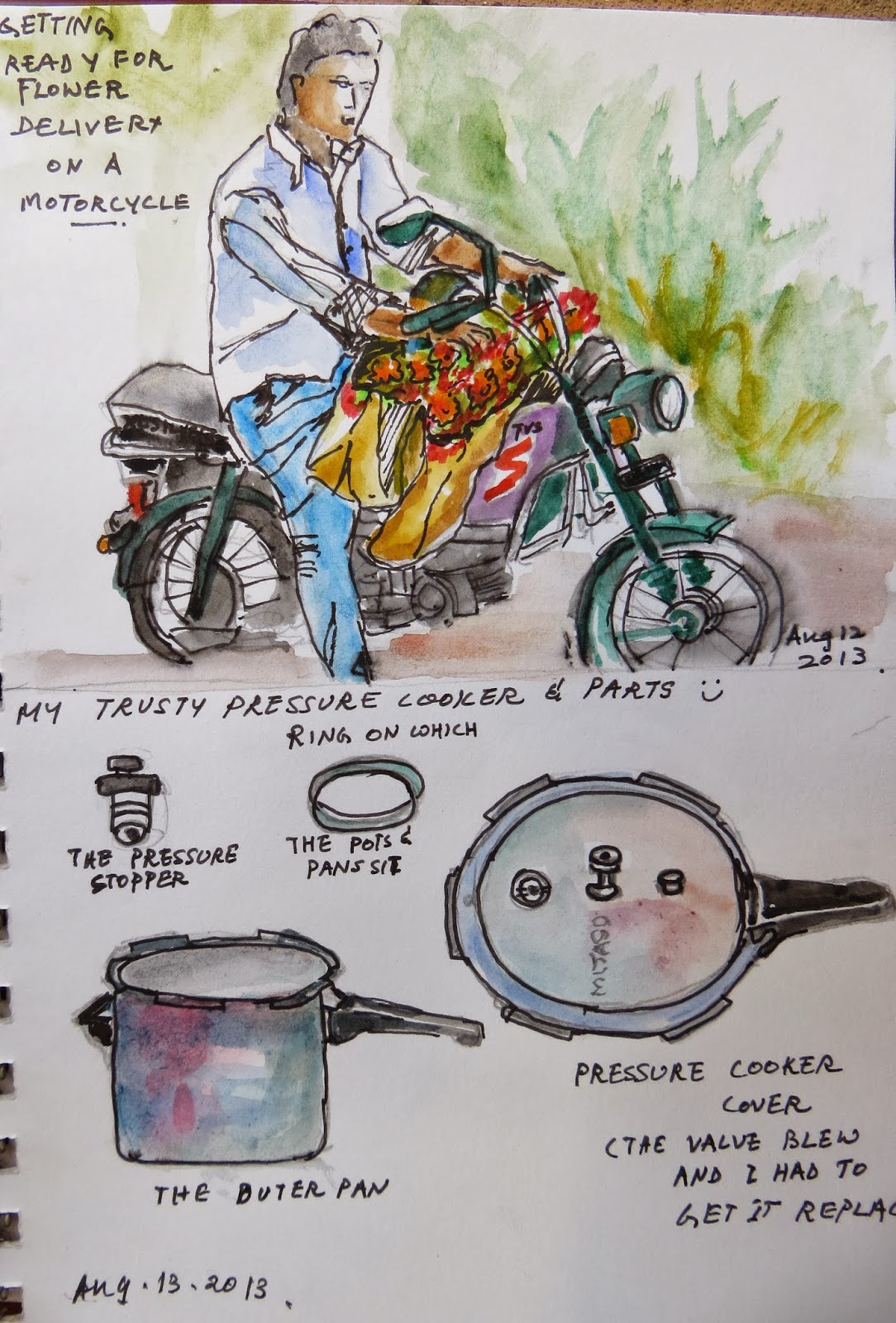 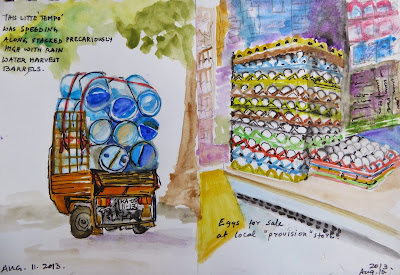 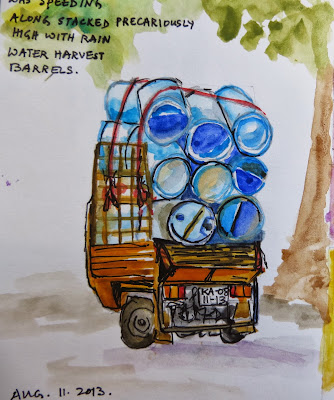 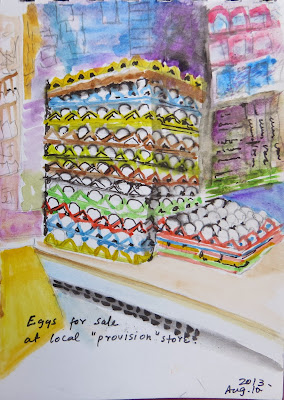 As always, I am surprised how even if I have paid no attention to have a theme for each page when I sketched them in India earlier in the summer, as I start blogging about a page, I see the connection very clearly!!!

It never amazes me to see the many innovative ways things are stacked - like the bright blue rain water harvest barrels being transported here in a little tempo or the white eggs in colorful crates at the local provisions store. I love the designs and shapes I see in the ingenious solutions people come up with - sometimes even defying common sense and gravity ;)
Posted by Meera Rao at Tuesday, January 14, 2014 16 comments: 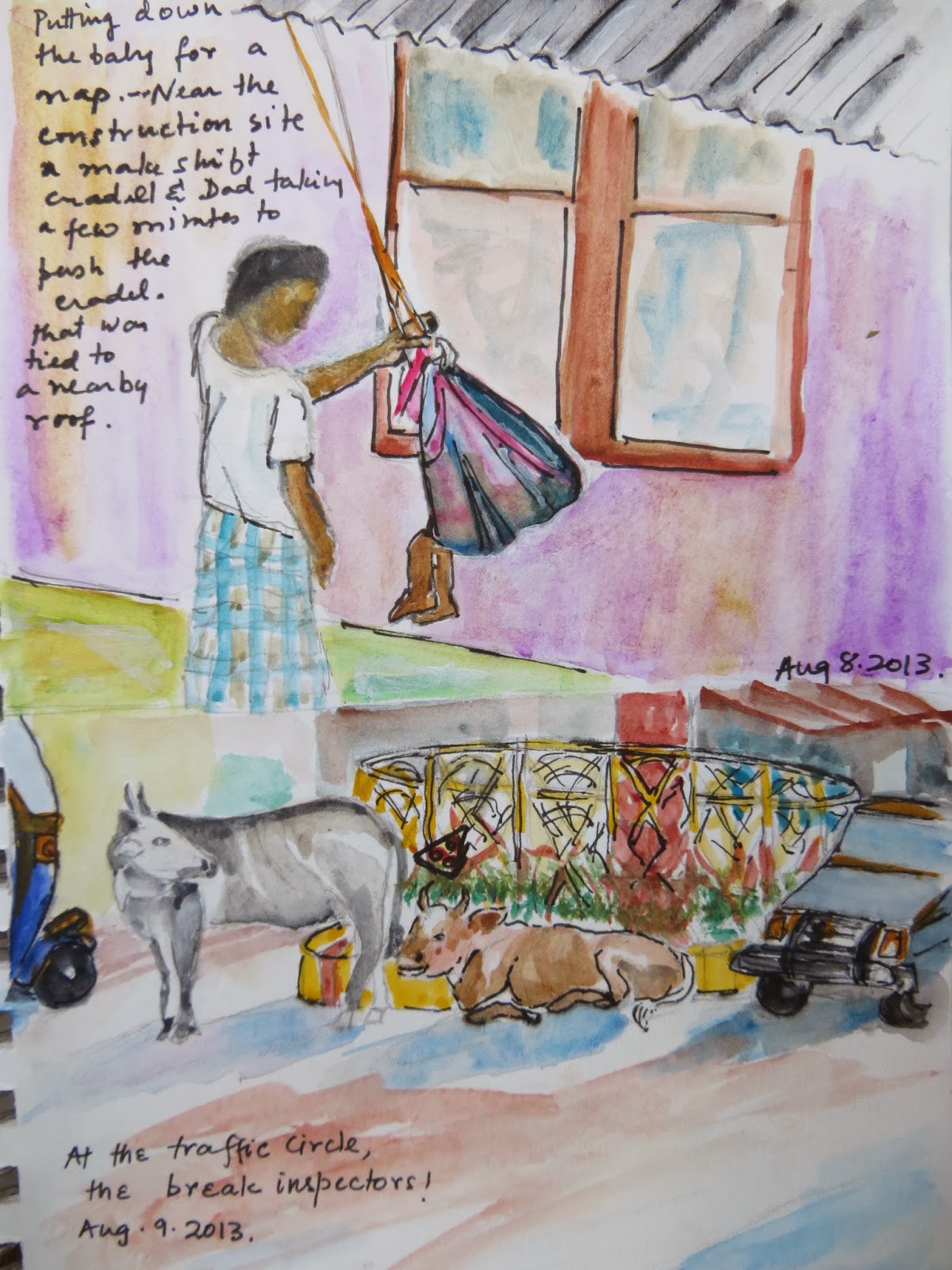 "Perspective is the rein and rudder of painting" said Leonardo da Vince. I think I lost both in these two sketches. I was really tempted to tear out the page and start over but had to remind myself that it is only a sketch book! 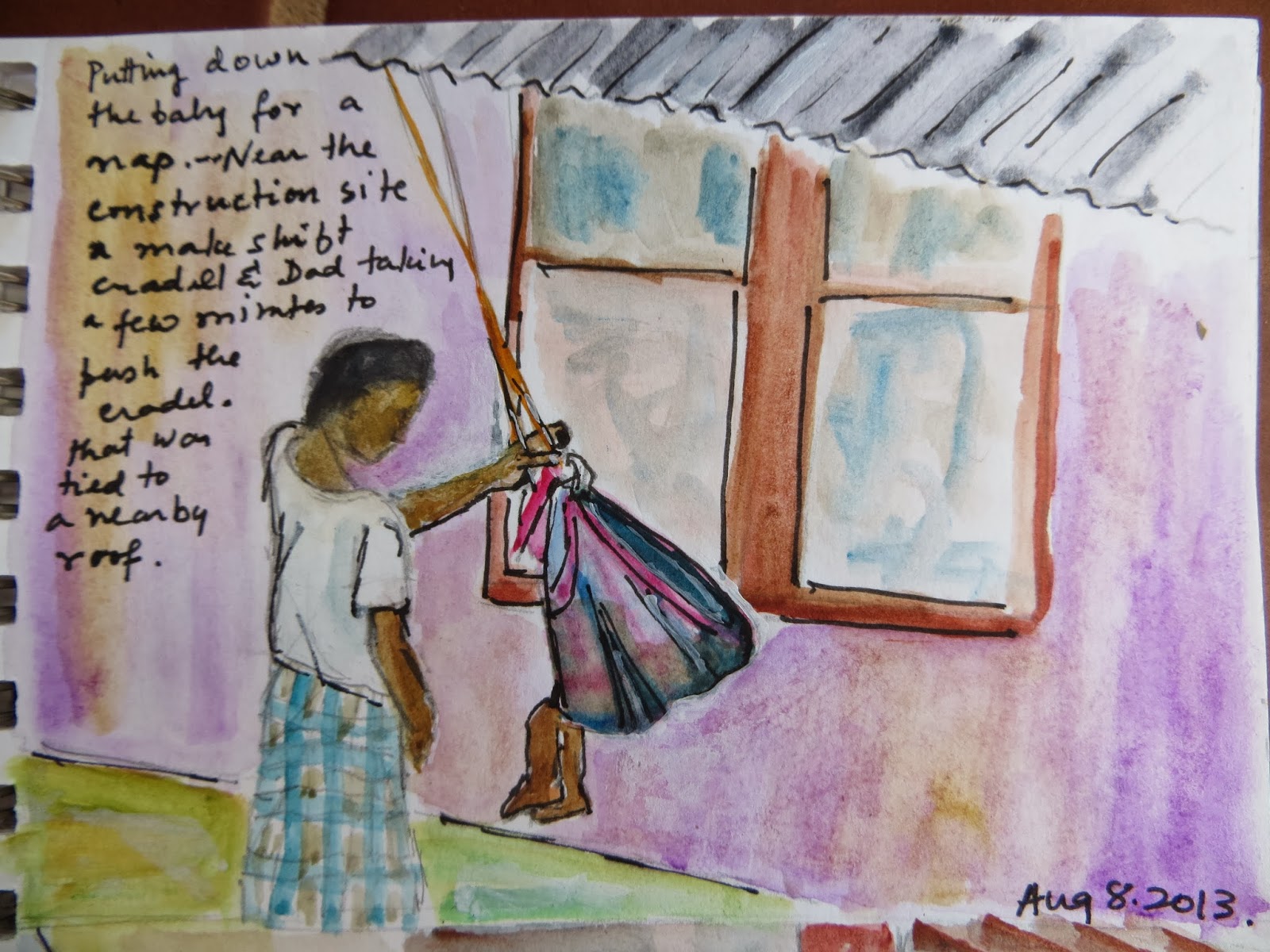 This father was a worker in a team of people fixing water pipes along the road by our building. He and his wife were both working and the kid was playing & running around near them for a while. Later, when the  child started fussing, the father checked with the house owner by the street and tied a cradle from their roof by the porch. The baby was settled inside the cradle and Dad swung it a few times - until the baby fell asleep and then he was back at work! I only had a a few minutes to sketch the father as he stood there. The rest of the sketch was done leisurely as the baby slept for a while. 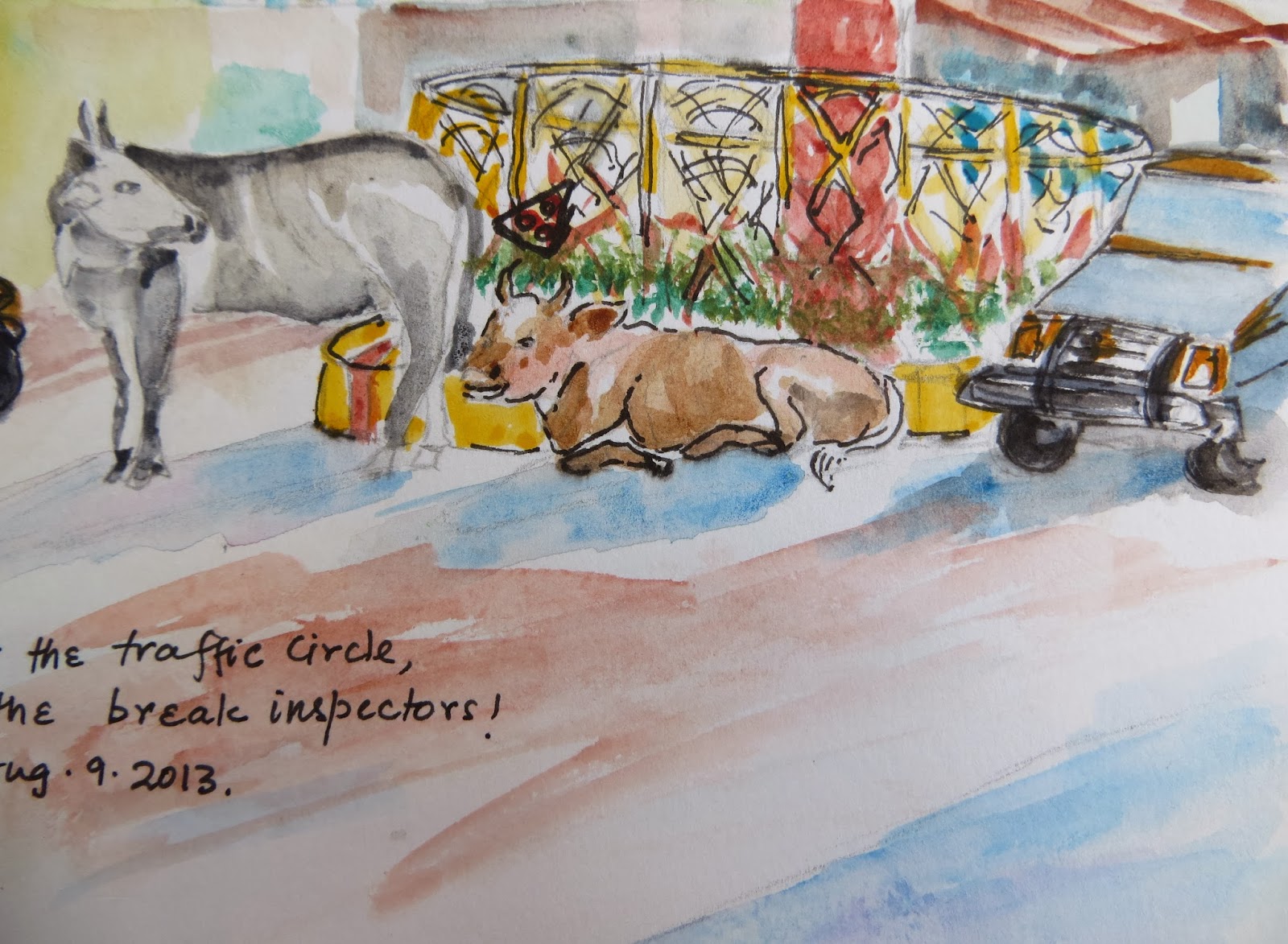 There are always at least a couple of cows by this traffic circle and I watched them every day when I went on my errands. Cars, buses, bicycles, trucks just go around them.  I was so engrossed in getting the cows right, I did not realized in the end that the vehicle was a bit too small :) Sketching with pen means the lines cannot be erased and I leaned to a lesson I won't forget!