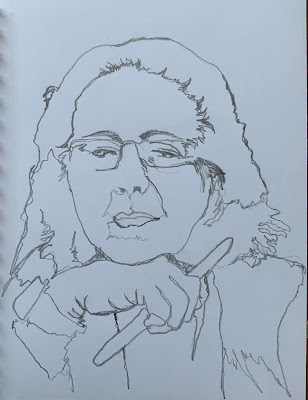 This self portrait is my entry to our local art group @ctvisualarts's art challenge prompt for continuous line drawing.  This drawing with 6B pencil was probably my 10th attempt! I took a selfie, moved it to Procreate app and did line drawings on it a few times trying to figure out the movement of the line to draw the face.  Next I tried drawing on paper with a micron pen, then about three times with a brush pen before trying with the pencil and drawing very very slowly!!!I liked that with the 6B pencil I could go back over lines lightly or dark without lifting the pencil :) I backtracked several times. As I became comfortable with the shapes, I started taking liberties and simplifying the lines. There is something to be said to drawing the same thing several times to get it right. Sometimes though I wonder will that compromise spontaneity and freshness? In the end I am pretty satisfied with the results of my umpteenth try :) 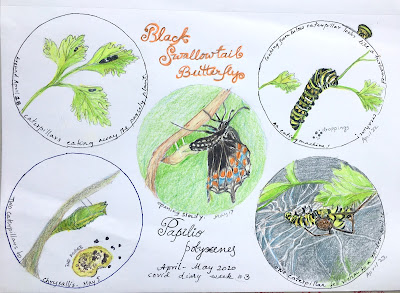 In mid April, one day for garnishing my pasta I brought in a bunch of parsley from the garden. Being a Vegan, I always check to make sure nothing is crawling around among the leaves. This time I found a bunch of tiny black dots and couple of  little larger ovals with a white band in the middle! Looking at them using a magnifying glass confirmed right away my suspicions. Those were the Black Swallowtail caterpillars :) I had to rescue them. So the bunch of parsley went into a vase and I now had new pets to watch over! A new page idea for my 'covid diary' obviously.

It was amazing to watch the tiny little caterpillars with voracious appetite methodically chomping away the parsley leaves! I had not seen any butterflies in the yard yet so I researched and found out that the eggs may have been hibernating during the winter waiting for the right signal from mother nature. We had to constantly restock the parsley leaves to keep up with the chompers and clean all the droppings that seemed to rain down constantly! It took about ten days for the caterpillar to be full grown. 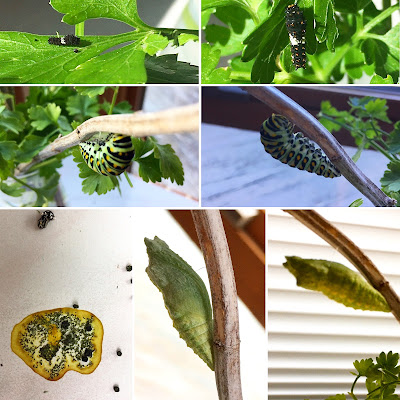 Then one started getting restless and racing up and down the stems. My husband guessed it was looking for a sturdier twig and brought a couple from the garden. And he was right! Next, one of the caterpillars did a 'purge' and then settled on a twig.  First its hind end was attached to the twig and then it spun one single thread and attached itself like a telephone linesman! (or a coconut tree climber) We kept checking on it for many hours. While we were away for about an hour to go pick up the groceries we had ordered, the caterpillar discarded its outer skin to reveal the chrysalis shell. In the lower left box of the photo montage above, is the discarded skin(top left corner ) and 'the purge' 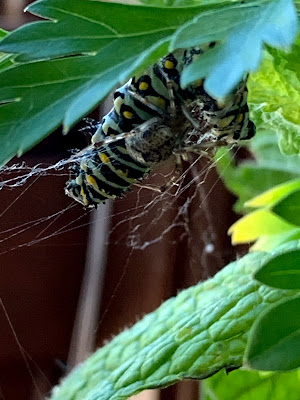 Unfortunately, one of the caterpillars fell victim to a spider - I guess we were not vigilant enough :(  It happened soon after the caterpillar became immobile after attaching itself to the stick.  The spider must have come in with the twigs and leaves ! I guess the natural cycle has many aspects. 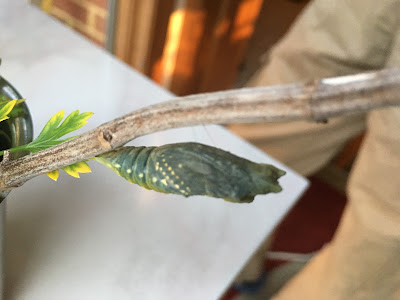 Chrysalis about ten minutes before the butterfly emerged (hindsight!)

Last night the chrysalis started turning dark in color.  It had been about twelve days and my research informed me that in the morning as the sunlight and warmth come about the butterfly may emerge. We both checked the chrysalis around six in the morning and again around 6:20 when I noticed beautiful dots and design. I took a photo and assumed it was not time yet thinking it had to turn darker. I went to make myself a cup of coffee. Next thing I knew, the butterfly was already out of the chrysalis and hanging next to a leaf. We took it outside and waited.  It took its own time warming up and stretching its wings. About three hours later it hopped to a flower close by and in no time at all flew off!  And I found out more blue in the wings makes it a female butterfly :) 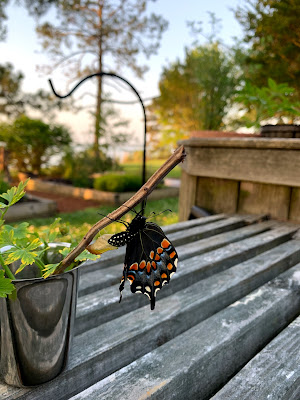 We have one more chrysalis indoors.  Hoping we will be able to see the butterfly emerge from this cocoon from the start !  Meanwhile we have to make sure there is plenty of parsley and dill growing in the garden.
Posted by Meera Rao at Sunday, May 17, 2020 2 comments: 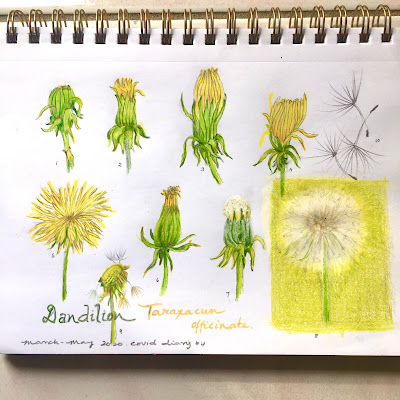 What a wonderfully complex world is in there on our lawn! We have always let the yard stay 'green', not really bothered by the 'weeds' and have admired the tiny colorful flowers that show up voluntarily. They bring with them many birds, butterflies and bees. The lawn does get mowed but we avoid weed killers or insecticides. When our daughter was a little girl, she would ask her Dad not to mow down the pink clover flowers and he always obliged by mowing around them! Blowing the fluffy seed heads of the dandelion was always a favorite pastime for her too !

I look up the names of the different plants every so often and admire the flowers but had never really checked each flower and plant carefully until now.  I take my time with these nature journal pages now for what I have dubbed as 'covid diary' .  Each page covers days and months and I sketch and add pieces as time goes on.  It has been about 8 weeks now and I have had about that many pages going in various stages at the same time :) The page above has been assigned #4. 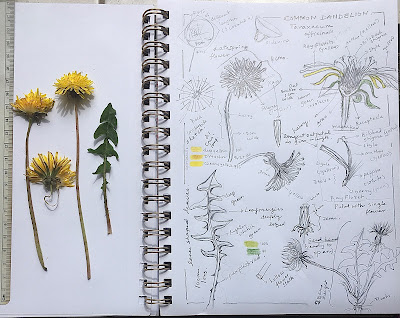 I learnt some interesting things about dandelions in my research:  "Dandelions tend to flower most abundantly in spring, but can re-flower in the fall, too. Flowers open in the morning and tend to close up at night. After a couple of days in flower they close and the seeds develop inside the closed head. The seeds, technically a fruit called a "cypselae" are produced on the flower stalk with each seed representing one of the florets in the flower head. Each has a pappus, a set of feathery bristles that act as a sail or parachute ensuring distribution of the seed by the wind. (What kid doesn't know that?) As the seeds mature the flower stalk elongates greatly, raising the fluffy seed head up into the breeze."

Ken Willis, head of horticulture at the U of Alberta Botanic Garden says "Dandelions were brought to North America from Europe and Asia as a vegetable, so they have many culinary uses. They are high in vitamins and the leaves are good in salads, the taproot can be ground into a coffee substitute and the flowers make wine. Grow it like lettuce and harvest it before the flowers bloom,"

I am yet to try it in my coffee, wine or salad though!!! 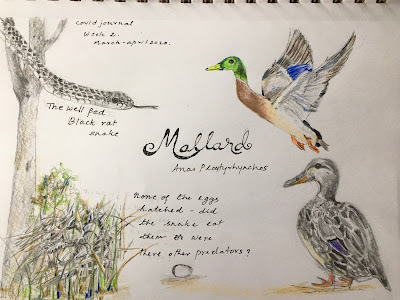 Last month at one point there were three duck nests with eggs in our yard - one by the back door tucked under a boxwood, one at the end of driveway hidden by the iris plants and the third one under an azalea bush near the front entrance to the house. Before nesting the Mallard pairs walked around the yard scouting for an ideal spot.  They even tested out deck corners and planters. 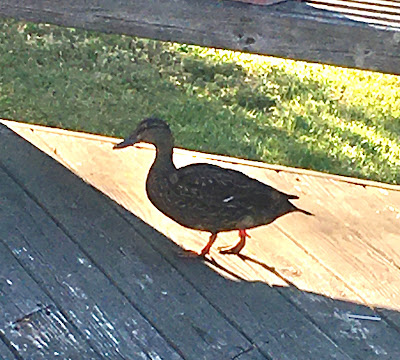 We routinely got spooked by the female duck who flew off from her hidden nest every time we stepped out the door.  We went out of the way to not walk by the driveway, walkway, anywhere near the nests. I did take a quick photo of the eggs once when the duck flew off the nest. We would check routinely to make sure the eggs were ok and the birds came back to incubate.  The females often left the nests - I am guessing to feed. 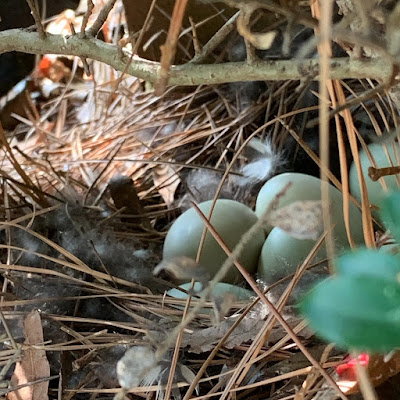 Then one day I saw an egg rolled on to the driveway and there were no eggs nor duck anywhere near the nest by the irises. The nest under the azalea was empty couple of days later. I saw bits of egg shells and no sign of the female.  I was hoping the last one would make it but unfortunately a day later, we spied a healthy black rat snake slithering away from the nest up a tree close by :(  I also know that there are other egg devouring critters in the neighborhood as well ! 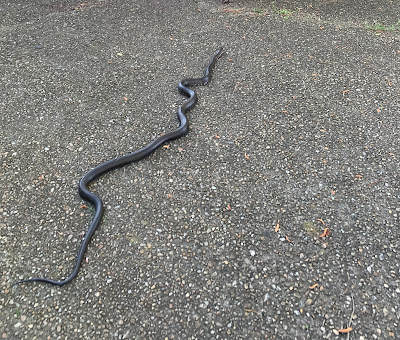 So instead of a duck and its brood, after all those weeks of waiting and watching, the final sketch on the journal page ended up that of a black snake!  I guess we have to respect nature and natural food cycles.

Couple of days ago there was another pair looking for a nesting spot.  I don't know if they were successful. I am praying and hoping I will  see a brood in a few weeks like we have seen in the years past.
Posted by Meera Rao at Monday, May 04, 2020 No comments: