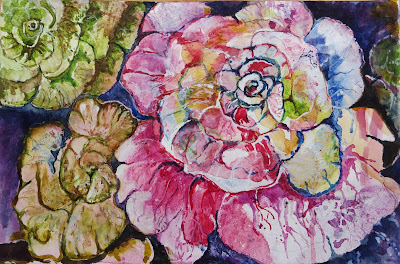 Sometime in the past few years, I had started a painting - there was some watercolor and a collage of rice paper (see below). Until earlier this year it was buried in my pile of unfinished paintings.  Even after staring at it for too long, I could not remember my plans for it.  By then it did not really matter anyway! 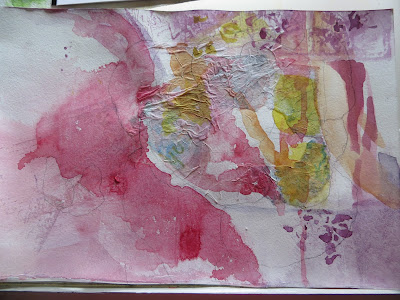 The colorful lettuce growing in our garden gave me an idea and reminded me of a painting I had done many years ago. After mulling over for a few more days I thoroughly enjoyed painting a much smaller more colorful version of that painting 'Cabbage Concerto in Red' which has found a home with a friend. Exploring the same subject and coming to it from a different place was a fun exercise.  The title for the first painting was courtesy of my son who was in high-school then! I wrote about it here. 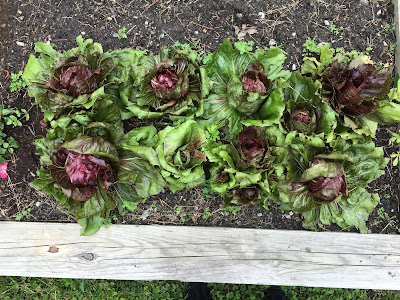 Colorful lettuce in my garden 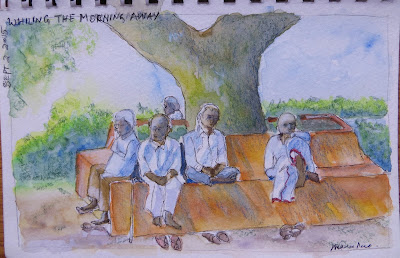 Under the shades of huge trees in parks or elsewhere there are always elderly men mostly in crisp white shirts, wearing traditional white "Dhoti" (click on link for simple version) or western style pants sitting and whiling away their time - keeping up with friendships, resting after their daily walks, discussing world affairs and may be just fighting off loneliness. I saw this group daily while out on my errands and had to record it :)

I feel a pang as I post this last sketch from my 2015 summer journal from India. The past four summers I went to India to take care of my Mother-in-law and started sketching daily as a way to keep up with my art. I compulsively sketched almost every single day when I was in India - something sadly I don't seem to be able to do now. As my Mother-in-law passed away late last year I won't be staying for extended period in Mysuru this summer.

During those stays, I filled five sketchbooks with around 250 sketches - the first year I had done 124 sketches -small 2.7x4" in Strathmore 5.5x8" Visual Journal watercolor 140lbs- one for every day of my stay. It was easy to keep up with daily sketching as my only concern was to sketch every day!

The second year feeling ambitious, instead of four sketches on the page like the past year, I decided to draw bigger 5"x4" sketches. I ended up with half as many sketches as most could not be completed in the allotted time each day. I had to resort to sketch one day and finish water-coloring them the next.

The year after, I was a bit more adventurous filling in two Japanese style moleskine accordion sketchbooks - not restricting myself to any particular size within the sketchbook. I still finished around 40 vignettes.

It was harder to sketch everyday in 2015 - I managed about 22- 5.5x8" sketches taking two to three days to finish each  - even working on the last few after my return as I unable to sketch on many days during my stay. On the whole, keeping the sketchbooks was definitely one of the best decisions I made.It helped see a bigger picture of life. I noticed and experienced things differently and the many fast disappearing vignettes of daily life are now not just only in my sketchbook but are etched in my memory.

The past few months though I have spent more time reading and looking at art than picking up a pencil or paintbrush. Now finally I am beginning to feel an urgency and renewed enthusiasm to shake off my lethargy, to get back to sketching and painting every day.

Whiling the Morning Away 5.5x8" watercolor and ink on 140 lb Strathmore visual Journal 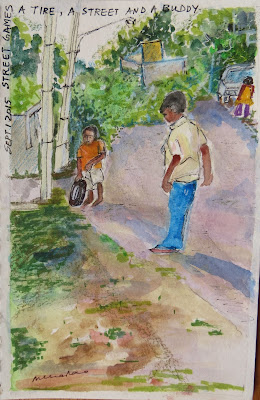 A Tire, A Street and A Buddy watercolor and ink by Meera Rao
India Art Journal 2015

Simple times and carefree days.  I watched them roll the tire back and forth down a quiet lane, laugh and squeal in delight. Pretty soon they had mastered the art of keeping the tire rolling without a break. I was a witness to a sealing of friendship, memories in the making and developing skills and imagination :) Definitely 'just playing' is really a lot of 'work' as well!

You can discover more about a person in an hour of play than in a year of conversation."
Plato

Under the Mid-day Sun 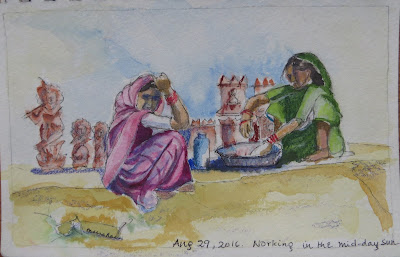 
To work under hot mid day sun is just plain hard work.  These two ladies were making plaster cast and clay statues for sale by a busy road side. They are migrants who traveled from northern states  to south in search for a better living. They had taken over the sidewalk, set up tents and a business. It is a difficult ethical problem - shouldn't the city evict them for blocking the roads for pedestrians like me who now have to walk on the edge of the road  with traffic whizzing by or do you applaud them because they are entrepreneurs  trying to make a decent wage by working and producing. For now, the only solution I saw was to capture them in my sketchbook.


Under the Mid-day sun 5.5x8" watercolor and ink on 140 lb Strathmore visual Journal