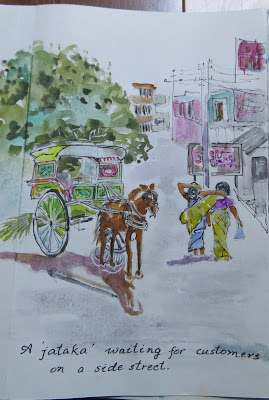 Quite often while the main streets are congested and busy, the side smaller streets are quieter and hold unexpected scenes! The 'jataka' - quaint very colorful, highly decorated horse drawn carriages can still be found in cities like Mysore and are loved by the tourists ! I love to photograph and sketch them.  The side streets are where they rest and recoup between rides. I have not ridden on one since I was a child and just might try again soon! This was a windy day and the two ladies were trying to hold on to their flying/flowing sarees and hair ! 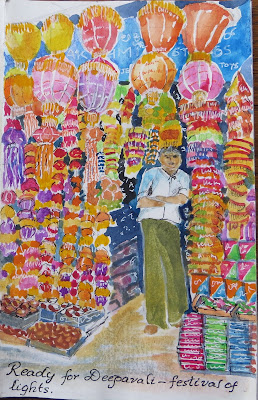 The lanterns for the festival of lights "Deepavali" were crammed into this tiny store.  There were all different sizes, colors, hanging, stacked one top of another, in boxes, bags, in every nook and corner of this store.  They were also a few traditional clay lamps in boxes as well, along with packets of sparklers or firecrackers.  There was so much color, shapes and textures,  I had a hard time deciding where to start - it was indeed a challenge to sketch it!

This is the last panel of my second, larger accordion sketchbook - and the scene is from my unexpected short trip back to India last year. This is the only panel from that trip and it was a few long months before I picked up the sketchbook again to finish the coloring, tinting and lettering etc. (hence 2014-15).

The sketches are done in Moleskine Japanese Album(large) in watercolors and pen.
Posted by Meera Rao at Monday, August 24, 2015 6 comments:

Service to the Devotees 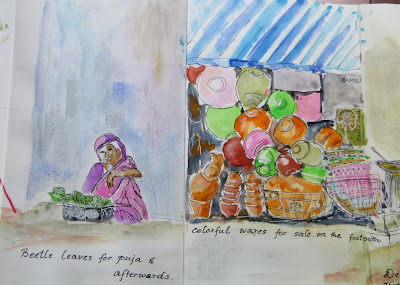 Festivals and devotees means an opportunity to sell - from beetle leaves for 'puja' or pleasure to colorful plastic pots, earthenware and sundry household goods galore. The streets are lined up with vendors who anticipate a brisk business around holy days. 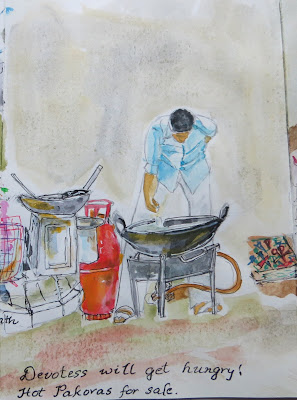 Devotee will get Hungry! India Sketch Journal 2014-15 by Meera Rao

And of course, there has to be freshly made mouthwatering delicacies! A simple stove, couple of gas cylinders, a big black cauldron with hot oil, a pot or two and some utensils are all that was needed for this enterprising cook to open a stall by the footpath! The smell of hot 'pakodas' was inviting and a line was forming even before the first batch was out of the oil! If only I could have scratch and sniff strip right here to complete this vignette! 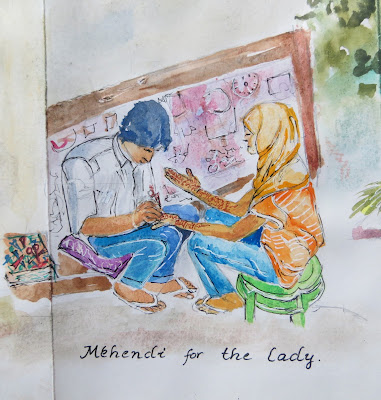 A few tubes/cones of 'mehendi' paste and this fellow was in business drawing beautiful elaborate designs on the hands and arms of ladies eager for the stunning look.  I stopped to chat and found out the girl was a muslim bride happy to be taking advantage of the opportunity around a Hindu festival to have 'henna' done couple of days before her marriage ceremony.

The sketches are done on Moleskine Japanese album (large) in watercolors and pen.
Posted by Meera Rao at Friday, August 14, 2015 6 comments: 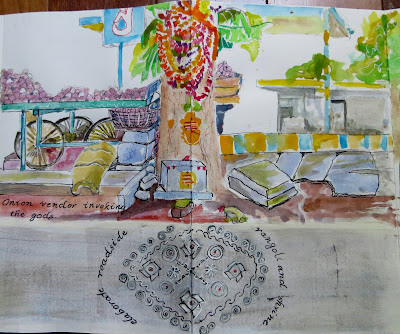 During the festival season in Mysore, every vendor gets into the spirit by decorating their little section of the footpath. On a quiet Sunday morning walk, I spotted this red onion stand with an elaborate huge 'rangoli' design on the road itself next to a tree turned into a shrine. With a lot fewer vehicles and pedestrians, the stand by a 'petrol bunk' (gas station) could not be missed.  The rangoli done in white powder on the road stretched to the median line! 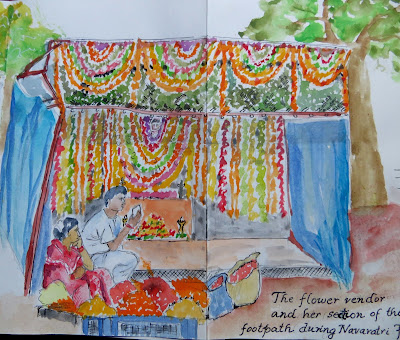 This flower vendor was giving her thanks to the goddess in her small stall turned into a shrine decorated long strands of colorful garlands. The blue plastic tarp tent was a good backdrop for the colorful flowers! 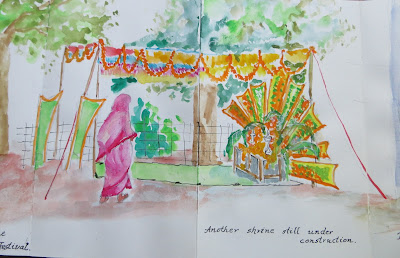 This was the beginnings of what turned into a elaborate shrine by one more vendor. It is so much fun to walk around the city checking out all the different ways the vendors try to show their devotion and give thanks to their favorite deity.

And an important notice and plea for help:

Please sign this petition at Change.org and get wallpart.com off the internet and off the business it is trying to do- sell artwork as posters without the knowledge and permission from the artists. Search your name/website on their webpage and you may be surprised you are being duped and compromised :( I came across the site via another blogger who posted about her works being stolen. I was shaken up to see all the pictures from my blog being offered at $5.59/poster!

P.S:  I discovered this morning that it is best bot to even go to that site to check -- but be sure to sign the petition!
http://peterandcompany.tumblr.com/post/124924181627/phishing-warning-avoid-wallpart-at-all-costs

I thought long and hard if I should continue to blog then decided to post but work towards getting wallpart off the internet.  I am hoping to alert other artists, photographers, art enthusiasts, customers and make them aware of this problem. Please spread the word about protecting artists and our work.
Posted by Meera Rao at Wednesday, August 05, 2015 6 comments: