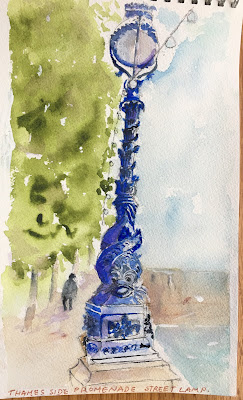 I was fascinated by the ornate light poles by the Thames River during our walk on the promenade on the banks  opposite side of the London Eye. It is a beautiful stretch with parks on one side and river on the other. We walked past war memorials all the way up to Big Ben -which was undergoing renovation then. There are huge trees along the street and Thames with 'Sphinx benches' under their shade to sit and watch the river as well as the buzz of city life.

Of course there is history, controversy and more behind these lamps. From the website Paul Dobraszczyk Rag-picking History : 'Built in stages between 1862 and 1874 by the Metropolitan Board of Works, the Thames Embankment transformed London’s riverscape by reclaiming marshy land next to the river and constructing wide carriage- and foot-ways and a high granite retaining wall, stretching over three miles in total.' After much deliberation 'a dolphin lamp designed by George Vulliamy, architect to the Board of Works'  was chosen.  Please hop over to the website and check out rest of the designs, photos and more juicy factoids :) 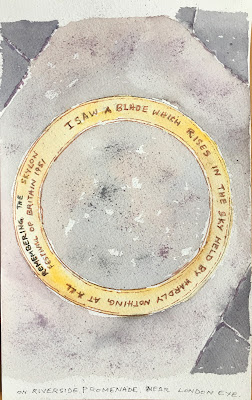 A small shiny  marker on the footbridge over the Thames River sent me googling  'Skylon' and 1951 Festival of Britain.  Of course, even the smallest objects around the city have interesting history :)

From Wikipedia : The Skylon was a futuristic-looking, slender, vertical, cigar-shaped steel tensegrity structure located by the Thames in London, that gave the illusion of 'floating' above the ground, built in 1951 for the Festival of Britain. The former location of the Skylon is the riverside promenade between the London Eye and Hungerford Bridge. Skylon was removed in 1952 when the rest of the exhibition was dismantled, on the orders of Winston Churchill, who saw the Festival and its architectural structures as a symbol of the preceding Labour Government's vision of a new socialist Britain. According to The Guardian  : The original Skylon, built in the last year of the postwar Labour government and immensely popular as a futuristic shape, was vengefully scrapped, cut in pieces and sold as ashtrays by an incoming Conservative administration.

These are the last two sketches of my travel sketchbook from last September - finally all posted in the blog! 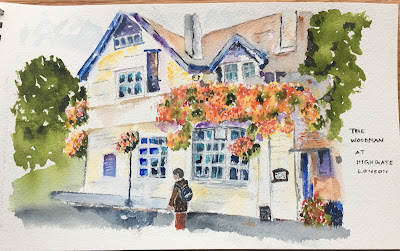 The Woodman at Highgate watercolor by Meera Rao

I loved the flower boxes and hanging baskets all over London.   We came across this charming pub often as we got in and out of the nearby tube station.  I preferred taking the bus over the trains just so I could see the beauty of the flower boxes on various buildings - even though it took us longer to get from place to place :)
Posted by Meera Rao at Wednesday, April 10, 2019 2 comments: